There is music I have heard

Sharper than the song of bird

There beyond the inner ear.

Softer than the sounds I hear

Softer than the ocean’s swell

In the caverns of a shell,

Of flying birds and little things,

Or a rabbit’s frozen fright.

This is the music I have heard

In the cadence of the word

And not yet heard.

I discovered this poem on a bookmark in a book that someone at school was weeding out of their collection. I knew Margaret Wise Brown from her classics Goodnight Moon, The Runaway Bunny, and The Important Book, but I wasn’t familiar with this poem. It first appeared in Nibble, Nibble, a collection of 25 poems which was first published in 1959 with illustrations by Leonard Weisgard. Wendell Minor created new illustrations for “Cadence” and four other poems from the original collection in 2007. 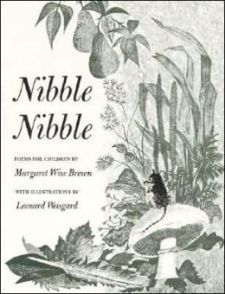 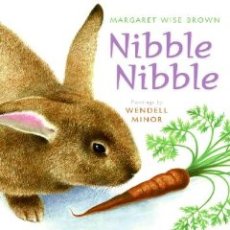 Brown was a pioneer in children’s literature and wrote hundreds of books. You can learn more about her life and work here. Leonard S. Marcus published a biography, Margaret Wise Brown: Awakened by the Moon (HarperCollins), in 1999 and Over the Moon: An Imaginary Interview with Margaret Wise Brown in the May/June 2010 of The Horn Book.

My favorite quote from this interview reveals Brown’s prescient wisdom about the lives of children.

“In this modern world where activity is stressed almost to the point of mania, quietness as a childhood need is too often overlooked. Yet a child’s need for quietness is the same today as it has always been–it may even be greater–for quietness is an essential part of all awareness. In quiet times and sleepy times a child can dwell in thoughts of his own, and in songs and stories of his own.”

We all need time to be lost in our thoughts, time to listen for those words “Not spoken yet/And not yet heard.”

Be sure to stop by Teaching Young Writers for today’s round up. Thank you, Betsy, for hosting!