Reply to the Question:
“How Can You Become a Poet?”
(After Eve Merriam)

Sit by a crackling fire
under a star-filled sky,
the air alive
with the song of crickets
and tree frogs
thrumming and trilling

Let their music seep
into your soul.

Study the flames,
leaping and licking
at a teepee of logs,
illuminating the night.

Be dazzled
by sparks,
orange fireflies
dancing and swirling,
tracing a glowing trail
as they race toward the heavens.

Poets often talk about finding the right form as being the key to unlocking a poem. This is true for this draft. I jotted notes and images for this poem two weeks ago. Since then, I’ve been carrying them around with me, talking myself through different combinations of words and order of lines, but nothing satisfied me. Then, as I was looking for another poem in Mary Ann Hoberman’s outstanding collection, The Tree That Time Built, I came across Eve Merriam’s
“Reply to the Question: ‘How Can You Become a Poet?’” I immediately recognized Merriam’s free verse examination of a leaf as a potential model for my campfire images. The original, which you can read on many websites and blogs, is focused on a single object, whereas I’m trying to capture an experience. Here is a link to Heidi Mordhorst’s post about how Merriam’s poem nicely illustrates the connection between poetry and science.

Please be sure to visit Michelle at Today’s Little Ditty for the Poetry Friday Round Up. 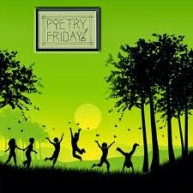 In August I was lucky to attend a Reading Institute at Teachers College Reading and Writing Project. This week-long institute is reinvigorating and energizing, and my brain is always bursting with ideas when I leave.

The staff developers at TCRWP do a terrific job of incorporating songs, videos, and other digital texts into their lessons to both engage students and broaden their horizons. I don’t watch much TV or listen to popular music on a regular basis, so I’m often out of the loop on what kids are watching and listening to. But after leaving New York, I was inspired to change the station on my way to work and listen to a country music radio station. Keith Urban’s new song, “John Cougar, John Deere, John 3:16” (written by Shane McAnally, Ross Copperman, and Josh Osborne) was playing. I was drawn in by the melody right away, and the lyrics really intrigued me.

I’m a 45 spinning on an old Victrola
I’m a two strike swinger, I’m a Pepsi cola
I’m a blue jean quarterback saying “I love you” to the prom queen in a Chevy…

Read the rest of the lyrics here.

Then my teacher brain kicked in and all sorts of possibilities for sharing this song with older students started swirling in my brain. The song evokes a bygone era and offers endless opportunities for building knowledge about the culture of mid-twentieth century America.

I was also reminded of George Ella Lyon’s poem, “Where I’m From.” Popular in writing workshops as a mentor poem, many teachers begin the school year with this poem as a way to learn about their students and build community. Pairing Urban’s rendition of “John Cougar, John Deere, John 3:16” with Lyon’s poem is a sure way to inspire young poets to pen their own poetic memoir.

“Where I’m From”
by George Ella Lyon

I am from clothespins,
from Clorox and carbon-tetrachloride.
I am from the dirt under the back porch.
(Black, glistening,
it tasted like beets.)
I am from the forsythia bush
the Dutch elm
whose long-gone limbs I remember
as if they were my own.

Read the rest of the poem here.

Be sure to visit Robyn Hood Black at Life on the Deckle Edge for the Poetry Friday Round Up. 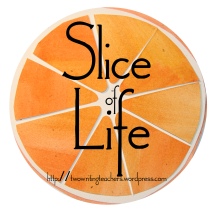 “Your absence has gone through me
Like a thread through a needle.
Everything I do is stitched with its color.”

The last official weekend of summer was bittersweet. My son was home, and we had company all weekend. Our days were filled with hiking, swimming, and napping. Our evenings began with suppers outside by candlelight and ended long past midnight around our fire pit. There were moments of laughter, but more moments of tears, as the loss of his dear, beautiful Julia is still a fresh wound. His heartbreak is palpable and visible in his face. But as we sat by the fire Friday night, I could feel his relief to be in our backyard, surrounded by his family and friends. I, too, felt a sense of peace start to return. This line, from “The Lake Isle of Innisfree,” by William Butler Yeats, came to me:

“And I shall have some peace there, for peace comes dropping
slow.”

“Dropping slow” seemed to me exactly the way to describe the process of trying to stitch your heart and life back together without all the pieces. He’ll be putting his heart back together for years to come; maybe for the rest of his life. I’ll be there to help him with each stitch.

This slice was difficult to write. It feels much too personal for a blog that is supposed to be about teaching reading and writing. And yet, a slice is “a simple way to practice what we ask of students—to write…a small sliver of your ordinary life.”  I am grateful to be part of this community and to have a place to share this writing, which seems so far removed from my original mission, but which was so necessary for me to write.

Thank you to Stacey, Tara, Dana, Betsy, Anna, and Beth for this space for teachers and others to share their stories each Tuesday. Be sure to visit Two Writing Teachers to read more Slice of Life posts.

About suffering they were never wrong,
The Old Masters: how well they understood
Its human position; how it takes place
While someone else is eating or opening a window or just walking
dully along;
How, when the aged are reverently, passionately waiting
For the miraculous birth, there always must be
Children who did not specially want it to happen, skating
On a pond at the edge of the wood:
They never forgot
That even the dreadful martyrdom must run its course
Anyhow in a corner, some untidy spot
Where the dogs go on with their doggy life and the torturer’s horse
Scratches its innocent behind on a tree.

In Breughel’s Icarus, for instance: how everything turns away
Quite leisurely from the disaster; the ploughman may
Have heard the splash, the forsaken cry,
But for him it was not an important failure; the sun shone
As it had to on the white legs disappearing into the green
Water; and the expensive delicate ship that must have seen
Something amazing, a boy falling out of the sky,
Had somewhere to get to and sailed calmly on.