Welcome to the Poetry Friday Roundup! I’m so glad you stopped by. You’re in for a real treat! Not only will you find links to other Poetry Friday posts, I’m thrilled to share poems and illustrations from Grumbles From the Town: Mother-Goose Voices With a Twist (WordSong, 2016), Jane Yolen and Rebecca Kai Dotlich’s hot-off-the-press companion volume to Grumbles From the Forest (WordSong, 2013), with illustrations by Angela Matteson. I was lucky enough to receive an F&G (folded and gathered) of this book when I was at The Highlights Foundation’s workshop, “The Craft and Heart of Writing Poetry for Children” with Rebecca Kai Dotlich and Georgia Heard.

These poems, that “remix old songs anew,” have broad appeal. Jane and Rebecca chose fourteen favorite nursery rhymes and gave voices to objects, (Jack’s plum), real or imagined secondary characters (Old King Cole’s daughter), or let the main character speak for him or herself (the Queen of Hearts). Young readers will love the playful nature of these poems. Older readers will appreciate the wordplay, such as learning that the dog from “Hey Diddle Diddle” always “hated playing second fiddle.” Some of the poems, such as “Not Another Fall,” explore the backstory of the original rhyme. What was Humpty Dumpty doing on that wall in the first place? 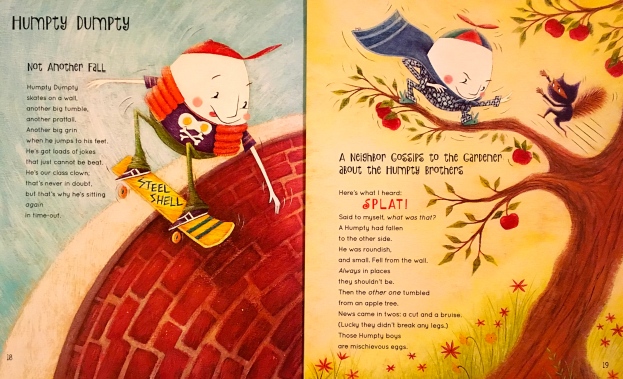 Angela Matteson’s whimsical illustrations are perfectly suited to these lively rhymes. Her artwork is infused with personality; who wouldn’t want to live in this shoe?

Grumbles From the Town also includes the texts of the original nursery rhymes, and I appreciated the fascinating end notes about the origin of each rhyme. The roots of some rhymes have been lost to history, but in most cases the background includes stories that are always interesting, if not always child-friendly.

This collection is a must-have for all elementary classrooms. Students of all ages will enjoy exploring point-of-view through these poems, and the opportunities for children to write their own nursery rhymes “with a twist” are endless! In addition, the possibilities for lessons about vocabulary and word choice abound. But the best reason for sharing this book with children is that these poems are fun to read and full of humor. Thank you, Jane, Rebecca, and Angela for so generously sharing your work today!

35 thoughts on “Poetry Friday: The Roundup is Here!”