When I was a sophomore in high school, my social studies teacher was an engaging, charismatic young woman named Carla Kazanjian. She was also a feminist. Really the first one I had ever known. (My strong, independent grandmothers and mother would not have considered themselves feminists). In the sleepy, conservative corner of Connecticut where I grew up, Ms. Kazanjian was laughed at by some, and considered by a few to be downright dangerous.

I didn’t care what anyone thought of her, though. I loved her. She taught me about the history of the women’s movement and its heroes: Elizabeth Cady Stanton, Susan B. Anthony, Victoria Woodhull, and so many more. She opened my eyes to injustice, but she also taught me to have confidence and believe that anything was possible. Most importantly, she inspired me to push myself and to never give up.

In the spring of my junior year, Ms. Kazanjian gave me a book that still has a place on my bookshelf. In The Woman Citizen: Social Feminism in the 1920s (University of Illinois Press, 1973), by J. Stanley Lemons describes how “various women and organizations worked for a broad reform movement to civilize, democratize, and humanize the American system, as they worked for progressive reform they advanced the status of American women. And as they fought for women’s rights, they pushed progressivism along in a decade of waning reformist impact.”

This sounds eerily familiar. Although I read this book forty years (!) ago, this passage from the book’s Preface makes me think I need to reread and rediscover how “social feminists held the progressive faith longer than most.” Many of the causes these women fought for, “…conservation…pensions, municipal improvements, educational reform, pure food and drug laws…social justice, and peace” are our causes still. As unbelievable and discouraging as that may sound, it also strengthens my resolve not to give up on the issues I believe in. Issues I know in my heart are worth fighting for.

As I stood on the lawn of the capitol in Hartford on Saturday, I thought of Ms. Kazanjian. I wondered if she was there among the crowd of 10,000 women and men of all ages and races. I knew I was there, in part, because of her. 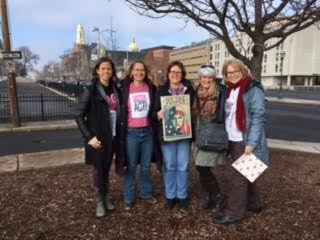 Thank you to Stacey, Dana, Betsy, Beth, Kathleen, Deb, Melanie, and Lisa for creating this community and providing this space for teachers and others to share their stories each Tuesday. Be sure to visit Two Writing Teachers to read more Slice of Life posts.

13 thoughts on “Slice of Life: The Woman Citizen”