“The writer should never be ashamed of staring. There is nothing that does not require his attention.” 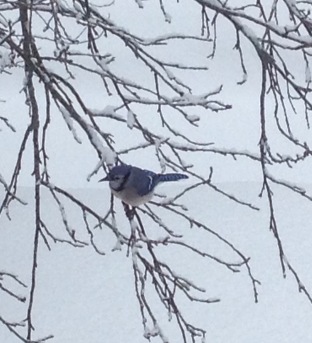 Like this blue jay and everyone else in the northeast, I’ve stared at plenty of snow this winter. So how hard could it be to come up with a poem for Carol Varsalona’s “Winter Whisperings” gallery? I had jottings about winter everywhere, a false start to a poem here, a line that definitely should be abandoned there. Nothing was coming together.

Taking a cue from Kate Messner, I decided to try to capture the many different moods of snow into one “Sometimes” poem.

Sometimes snow
whispers itself into the world,
falling gently to the ground,
muffling every sound.

Sometimes snow
ROARS through the air,
the north wind sculpting it
into undulating drifts.

But then, come March,
snow begins to
melt.
At first just a trickle,
then a torrent,
filling brooks and
streams and rivers,
washing away
our winter weariness,

Be sure to visit Robyn Campbell for the Poetry Friday Round Up, and thank you to Stacey, Tara, Dana, Betsy, Anna, and Beth for this space for teachers and others to share their stories each day during the month of March and on Tuesdays throughout the year. Don’t forget to visit Two Writing Teachers to read more Slice of Life posts.