Today’s post is doing double duty as my contribution to the Slice of Life Challenge at Two Writing Teachers.

We’ve all heard of a school of fish and a flock of birds. But what about an ostentation of peacocks?

Collective nouns, those words that turn a group of people, animals, or things into a singular noun, are words that children often learn intuitively as they acquire language as toddlers and preschoolers. The CCSS calls for collective nouns to be formally introduced to students in second grade.

If the goal of teaching these words to young writers is to have them use them in their writing, they need to have “read that language, to have heard it in [their] mind, so that [they] can hear it again in order to compose it.” (NCTE Beliefs About the Teaching of Writing) Although the styles of these books are very different, each one would be a good choice for introducing the concept of collective nouns. 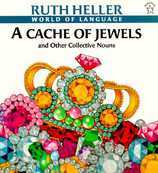 Ruth Heller’s A Cache of Jewels (Grosset & Dunlap, 1987) is an old favorite, one I read to my third graders when I began teaching almost twenty years ago. This brightly illustrated book is still a good model for using collective nouns. Heller includes collective nouns of all kinds, not just those that describe groups of animals.

I’ve found some new books students will enjoy as they learn more of these words. My favorite is A Zeal of Zebras: An Alphabet of Collective Nouns (Chronicle Books, 2011). Woop Studios, a London-based collective (honestly, that’s what the book says!) of four artists, have created “a visual safari through the animal kingdom” (back cover). This oversized picture book is filled with stunning illustrations, unique collective nouns and facts about each group of animals. Some, “an implausibility of gnus,” for example, seemed so improbable that I looked it up. (It’s true, and you can find an extensive list of collective nouns for groups of animals here.) Others are so appropriate: of course it’s “a galaxy of starfish.” Some of the longer words will be a challenge for second graders, but these are the kinds of words kids love learning and trying to use.

One Sheep, Two Sheep: A Book of Collective Nouns, (Little Hare Books, 2010), by Patricia Byers and illustrated by Tamsin Ainslie develops the concept of collective nouns being a group of three or more. Each two-page spread follows the same pattern: “One sheep, two sheep, a flock of sheep.” Charming illustrations provide visual support for the growing numbers in the group described by each collective noun.

Finally, silliness ensues in Rick Walton’s Herd of Cows! Flock of Sheep! (Gibbs Smith, 2002, 2011; illustrated by Julie Olson). This book incorporates the collective nouns into the story of how Farmer Bob’s animals jump into action to save him after his bed is swept away in a flood.

I don’t know if there’s a collective noun for a group of bloggers, but Stacey, Tara, Dana, Betsy, Anna, and Beth are the best around! Thank you for hosting the Slice of Life Challenge. Be sure to visit Two Writing Teachers to read more Slice of Life posts.