Last week, on the sixth day of school, my fourth grade colleagues kicked off the year in style with their annual “Readers’ Choice Awards.” Wanting to make summer reading assignments more purposeful, Bernadette and Kim came up with a plan that also energized their students about reading.

Each student was encouraged to nominate one of their summer reading selections (all chosen from a list of suggested titles, but students could chose a book not on the list) for the best book in one of the following categories: Best Character, Best Setting, and Best Plot. Students wrote their nominations, hoping to persuade their classmates to vote for their book. Once all the nominations were shared, the children voted for a book in each category.

Most fourth-graders arrived at school on Friday dressed to the nines for the awards ceremony, which included a red carpet, golden statues, and lots of applause. After a quick thank-you to the parents from Kim and Bernadette, the Masters of Ceremonies were introduced, and the nominees for the first category were announced. Students were called up to the podium to share the book they nominated, and the runner-up was announced. Then the emcee opened the envelope containing the name of the winner. To heighten the excitement, students in the audience provided a drum-roll on their laps. A statue was presented to the student who nominated the winning book before he or she read a short thank-you speech. 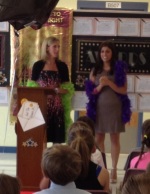 Once all the awards had been handed out, students mingled with their parents and other guests and posed for photos. All the nominations were displayed for visitors to read, and there were even Hollywood-like stars on the floor leading into the cafeteria.

Although this ceremony lasted only half-an-hour, it’s impact will be felt for the rest of the year. By being sensitive to including as many students as possible in the ceremony, Kim and Bernadette created a supportive tone in their classrooms and sense of community that often takes much longer to establish. Even students whose books weren’t chosen had the opportunity to share the title of their book. Parents loved seeing their children celebrate their summer reading in a meaningful way, and the students started the year off with style, excited about reading and sharing books with their friends.

Thank you to Stacey at Two Writing Teachers for hosting Slice of Life Tuesdays!