Poetry is an excellent way to introduce a subject. Concise, yet packed with meaning, poetry can convey the essence of a topic or subject in just a few lines. Often there are questions between those lines, pathways to a deeper knowledge and understanding of a subject.

Marilyn Singer’s poem about Abraham Lincoln, from her collection of poems about our presidents, Rutherford B., Who Was He?: Poems About Our Presidents (Disney-Hyperion, 2013), is just such a poem.

By stovepipe hat, beard, large size,
he’s the one we recognize.

By addresses of great note,
he’s the one we often quote.

By leading through war—wrenching, bloody—
he’s the one we always study.

By exercising his high station
to proclaim emancipation,

then meeting such a tragic fate,
he’s the one we rank as great.

“I am a slow walker, but I never walk back.”

© Marilyn Singer, 2013
Shared with permission of the author

By the time kids are in 4th or 5th grade, they know who Abraham Lincoln is, but what is the address we often quote? Which war? What is emancipation? These are great introductory questions to a study of Lincoln and the Civil War. 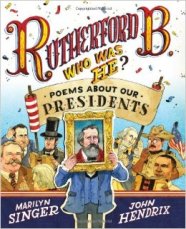 Wednesday was the 150th anniversary of Lincoln’s death. Our country was in the midst of celebrating the end of that “wrenching, bloody” war when John Wilkes Booth’s assassination of Lincoln plunged us into mourning once again. Young readers get a sense of how profoundly people grieved from Robert Burleigh’s Abraham Lincoln Comes Home (Macmillan, 2008). Burleigh tells the story of a boy and his father, up long before dawn, to travel “miles away” so they could view Lincoln’s funeral train and pay their respects to the fallen president. Wendell Minor’s illustrations depict crowds standing by bonfires along the tracks, waiting to get a glimpse of the train. This scene played out over and over again on the 13 day, 1,600 mile journey from Washington, D.C. to Springfield, Illinois, which is described in more detail in Burleigh’s afterward. There is also a map showing the route the train traveled, as well as a list of interesting facts.

Lincoln’s death inspired some Walt Whitman’s most memorable poetry. Here are the first lines of “When Lilacs Last in the Dooryard Bloom’d.”

When lilacs last in the dooryard bloom’d,
And the great star early droop’d in the western sky in the night,
I mourn’d, and yet shall mourn with ever-returning spring.
Ever-returning spring, trinity sure to me you bring,
Lilac blooming perennial and drooping star in the west,
And thought of him I love.
Read the rest of the poem here.
Finally, I’d like to share another poem from our 50 States Poem Project. Although this poem was inspired by Laura Purdie Salas‘s poem about Arlington National Cemetery, it seem a fitting way to close this post.

Please be sure to visit Robyn Hood Black at Life on the Deckle Edge for today’s Poetry Friday Round Up.