Thanks to Columbus sailing the ocean blue all those years ago, however, this weekend I was able to sit down with a few picture books and just read.

First up was The First Drawing, by Mordicai Gerstein (Little, Brown; 2013). This book is a great example of a writer reading something in the news and asking “What if…?” Gerstein imagines an 8 year old boy living 30,000 years ago who encounters a wooly mammoth while out with his father. When he sees the mammoth in the shadows on the wall of the cave where he lives, he tries to describe it to his family. Frustrated by their inability to see his vision, he grabs a stick from the fire and begins to draw, and the mammoth comes to life for all to see.

I love that this book begins with the word “Imagine” and ends with “magic.” Capturing the often elusive images and thoughts that float through our minds through drawing is magic indeed! 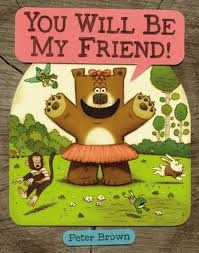 By pure coincidence, two Peter Brown titles were in my pile. YOU WILL BE MY FRIEND!  (Little, Brown) was published in 2011 and got lots of good press, but somehow I never got around to reading it. Desperate for a friend, Lucy sets out one morning determined to find one. Despite her good intentions, her day doesn’t go as planned and she’s feels “hopeless.” Just then, a flamingo wearing a bow-tie spots Lucy in her despair and asks Lucy to be his friend. On the last two pages, Lucy and her new friend take great delight in doing everything Lucy imagined she and her friend would: swimming, climbing trees, doing cartwheels, having a picnic, then a dance party.

Kids will enjoy Brown’s humorous illustrations of Lucy’s missteps along the way to finding her friend. This book would be a great mentor text for a book about making friends. On a side note, I couldn’t help noticing a resemblance between Lucy and her friend and another pair of friends 🙂 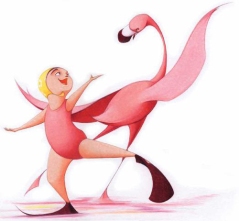 The cover of Brown’s latest offering, Mr. Tiger Goes Wild (Little, Brown; 2013) is reminiscent of the jungle landscapes of  Henri Rousseau. After a lifetime of “always being so proper,” Mr. Tiger decides he’s had enough and follows his instincts to the wilderness where he goes “completely wild!” Kids will love this about Mr. Tiger. Parents and teachers will appreciate that Mr. Tiger comes back to civilization with his individuality in tact and his wildness in check.

Be sure to visit Jen at Teach Mentor Texts and Kellee at Unleashing Readers to find out what other people have been reading lately. Thanks, Jen and Kellee, for hosting!

7 thoughts on “It’s Monday! What Are You Reading?”